For teenagers where I grew up, a Florida suburb built between the cities of Clearwater and Dunedin, one mall represented the central site for public life: Countryside Mall. The name is instructive because Countryside wasn’t alongside the “country”; it sat at the intersection of State Road 580 and U.S. 19, then a major conduit for Florida traffic that heading as far north as Erie, Pennsylvania. Located a sizable distance from both Clearwater and Dunedin, Countryside signified the rough land that had been plowed under when humble two-lane 19 bulked up to accommodate the new developments. It was more than just a means of getting somewhere; it was a place of its own. Clogged with freshly planted suburbs and the supportive infrastructure that grows around these sorts of places, Highway 19 called forth a mall and named this site for the country it replaced. It’s a cliché endemic to this sort of writing, but that’s just what happened.

Countryside was an enclave against the old world of downtowns and the rickety social mores they represented. Surrounded by acres of free parking, enclosed against the harsh summer sun, and protected by an internal security force (mocked by my friends as those “old men in red jackets”--retired cops, we assumed), Countryside was the agora, the public green, the place to be seen. We all had typical teenage jobs (I pulled pork butts at a local barbeque restaurant, waited tables at the nearby Steak ‘n Shake, and even served time at the mall’s McDonalds for a couple weeks when I needed money for prom). We all could afford to shop at Countryside from time to time, digging through bargain bins for cheap music cassettes of our favorite bands. But to us, the mall was much more than a place to buy things. It was our dating habitat, our fashion show, and our refuge from responsible life. 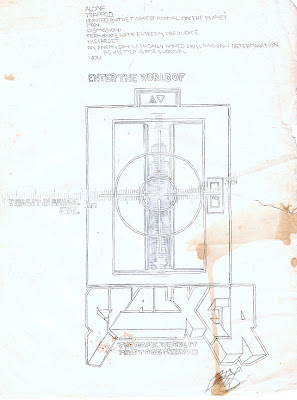 The mall was also our place to play “Stalker,” a revved-up version of hide-and-go-seek that grew out of our love for 80s-era slasher flicks. In our game, a “stalker” would chase “victims” throughout the mall. But we followed horror film rules, which meant that no one could run, and no one could occupy a hiding place for more than a minute. While we played out our suburban fantasies, walking and hiding from store to store, we transformed the mall into a film set. Security guards seemed to understand their role as “meddling cops” easily enough, but the shoppers never did came to appreciate their roles as “annoying obstacles.” Nonetheless, playing Stalker with my friends, we learned how to perform/transform a formal and authorized place into our kind of space, an environment where real and perceived dangers could be managed.

In the teen movies of my youth, we saw malls that reflected our own experiences. The big mall movie of my era was Fast Times and Ridgemont High, though truthfully I don’t recall anyone who thought of this flick as a “mall movie.” Fast Times was simply a teen movie where some of the most significant and banal moments occurred in a mall. Not surprisingly, many of the film’s interior shots where filmed in the Sherman Oaks Galleria. Bright and brimming with shops, and safely enclosed from the world of adults and their rules, The Galleria offered a perfect setting Fast Times. The choice seemed obvious, indisputable. Where else could eighties-era suburban teens hang out? In American Graffiti early-sixties-era California kids cruised Main Street, darting in and out of adult responsibilities but keeping their sensibilities securely in childhood. In Dazed and Confused, mid-seventies-era Texas kids transformed their small town into personalized (and literal) “stomping grounds.” They toked up at the Moon Tower, played foosball at the emporium, and scored tickets for Aerosmith, dreaming of that perfect high that waited just over the horizon beyond the frontier of a crummy town. But for kids in the 1980s, at least kids where I grew up, there was no horizon, and we couldn’t imagine hanging out downtown: the space was uninviting.

It was surely worse elsewhere around the country where urban centers had progressed further along their slow descent into shuttered and boarded oblivion. When Bruce Springsteen sang about his hometown’s empty storefronts in the 1984 album Born in the U.S.A my friends and I vaguely got his point, though we’d never seen whitewashed windows on Main Street. We’d never thought to look. And driving offered little relief from the boredom of our enclosures, since U.S. 19 simply connected us to more suburbs. While this lament merely revealed our provincial ignorance, it really seemed we had no place to go. Utopia was one freshly mowed lawn after another. Certainly, we could have headed further south to visit the old school urbanity of St. Petersburg, or we could have headed north along the arching coast where the highway soon returned to its two-lane roots. But we almost never did. We lived indoors, recognizing the Fast Times mall as our own.

My friends and I liked Fast Times because we liked the characters (despite the fact that they looked so much older than real teenagers), but we respected Fast Times because this movie got many of the details right. Of particular interest to me is how the movie depicted the mall’s video “arcades” not as some form of social-commercial connective tissue but as a place to break the bonds between teenage life and the adult world of the city. In the movie and in my experience, arcades provided a separate space where intruding adults were little more than zombies, participants in a horror show they could not recognize. In Fast Times, and certainly at Countryside, the mall replaced Main Street as a gathering place; the mall was the central site of social ordering and hierarchy. Most importantly, the mall provided a quasi-public enclave where we made the rules, or at least thought we did. And we could hardly imagine an alternative to this place.

Read my entries on Dazed and Confused and American Graffiti: Great Movie Endings Part 1
Email ThisBlogThis!Share to TwitterShare to FacebookShare to Pinterest
Posted by highway163 at 8:24 AM

It was the line "Taming the semicolon" that made me look at your blog.

Very cool. I'll be back!

BTW, I'm putting a link from my blog to your blog. That should increase your readership by two (being optimistic).

I used to go to the Countryside when visiting Clearwater with my parents. I assume we frequented Morrison's.

The indoor ice rink cracked me up.