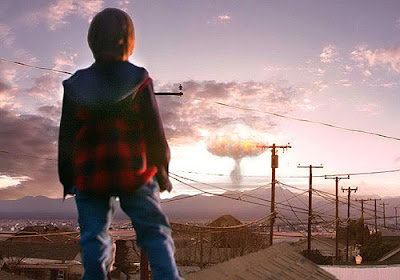 It's a shame that few people have moved to the television city of Jericho.

Set in a post-apocalyptic nightmare of collapsed federal government, crazed road gangs, and inter-city warfare, Jericho is a surprisingly sweet family drama that focuses on a small Kansas community trying to come to grips with the transformation of their lives. Prewar leaders find themselves swept away as new value systems take hold. The farmer viewed as an amiable dunce before the bombs becomes an indispensable community resource. The grizzled (yet amiable) mayor loses his position to a law and order security czar. And amidst all the turmoil and politics and recriminations, families continue to cling to each other and to missing loved ones.

Jericho tackles complex issues, exploring their contours over multiple episodes. When road-weary newcomers arrive, starving and desperate, should the community open the homes of its citizens who haven't returned since the bombs exploded? Or should the town control its borders and restrict entry only to outsiders who can offer help? Similarly, the show explores the impact of hunger upon our fragile ethics. Is it acceptable to steal from a neighbor to feed your family? Is to acceptable to allow one person to die in order to save another? What's cool about Jericho is how the show demonstrates that these sorts of questions cannot be so easily outsourced to experts -- cops, doctors, clergy -- in case of disaster. When the walls come down, even simple everyday people in a small Kansas town must search their consciences, both collectively and personally.

And then there's the mythology: an unfolding revelation of who detonated the bombs and why. In this manner, Jericho is as frustrating and delightful as The X-Files in its half-lidded hints and dropped threads. Did the Chinese launch the attacks, or are they trying to help us with those airdrops of food. Why didn't Hawkins detonate his nuke, and whose side is he on anyway? And what was with the electromagnetic pulse? I remember seeing the air burst in the show's opening weeks, and thinking, "who launched that?" To this day, I haven't a clue.

Jericho took a while to find its footing. The show is a complicated hybrid: action/adventure, morality play, family drama, small town 90210. Even now, some episodes meander through seemingly mundane details, leaving the mythology underdeveloped. As a result, the show has suffered declining ratings and virtually no buzz, even by folks who should love this sort of thing. At this point, CBS hasn't even announced whether it will renew Jericho. And that's a shame.

Jericho has heart, it has likable characters, and it has a fascinating story. I discovered it because my cable provider, Comcast, featured the show in its on-demand channel. Jenny and I are hooked, watching it every week to find out what happens to that little Kansas town.

Will the windmills provide enough power? Will the mercenaries return? Will the harvest be enough to last?
Email ThisBlogThis!Share to TwitterShare to FacebookShare to Pinterest
Posted by highway163 at 8:29 AM