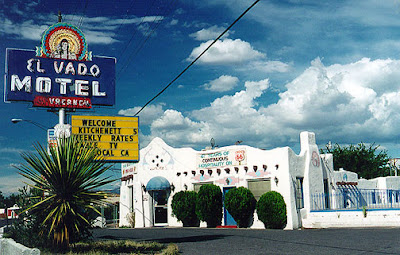 The El Vado Motel in Albuquerque, New Mexico, is a Route 66 icon that just may survive the onslaught of "developers." Currently the motel is closed, but it is still standing. A fellow named Richard Gonzales now seeks permission to tear down most or all of the 1937 Pueblo Revival motel so he can build townhouses.

I stayed at the El Vado in 1996 on our family's first road trip, and I revisited the site in 2004 while attending a conference. Both times I enjoyed the chance to rent a cheap, clean, and comfortable room under the glow of a nearly perfect motel sign. I've heard rumors about meth labs and prostitutes, but the El Vado always seemed safe and friendly to me. More importantly, this motel has character.

The site's pueblo appearance reflects an age of highway travel when diners, bowling alleys, motels, and other otherwise forgettable places sought to lure motorists through themed appearances. Why stay in an anonymous motel room when you can stay in a Spanish hacienda or mission? Sure the effect went only to the facade; one motel room has always been like another (with a few delightful and bizarre exceptions). But after driving hundreds of miles, searching for a room in the setting sun, it's wonderful to pull into a place like the El Vado and experience a place worth remembering when the sun rises.

Destroying the El Vado would add another sad story to a tragic epic of wholesale abandonment of Route 66's motel history, places like the streamlined Coral Court south of St. Louis and the sublime Yukon and Big 8 motel signs east of Oklahoma City, which once greeted tired motorists with jaw-dropping beauty and design.

Fortunately, Albuquerque's landmarks and urban conservation commission has pushed back on Gonzales's plans, insisting that he offer far more justification for the destruction of a site that was placed on the National Register of Historic Places back in 1993. Right now the fate of the El Vado is kicking between the city council and its landmarks and conservation commission. Most observers think that the El Vado has escaped the wrecking ball, but one can never be too sure. This is one debate I intend to follow.

(Photo by Jenny Wood)
Email ThisBlogThis!Share to TwitterShare to FacebookShare to Pinterest
Posted by highway163 at 9:31 AM

Good news -- the regional, Pueblo Revival styling of El Vado Motel is not limited to the facade. Room ceilings are wood log beams with wood decking (all varnished), most walls are adobe brick (makes for quiet rooms), and the place has a "living room" adjacent to the office with similar character. The El Vado was touted as a "swanky" court when it was built, and it still stands out among Albuquerque's remaining auto courts.